The Second "Orb Twin" Appeared an Hour After the First

Below are two mysterious orbs I photographed indoors, about an hour apart, while photographing a featureless wall.  The two orbs look almost identical, both having a pair of stripes forming a "T" shape. 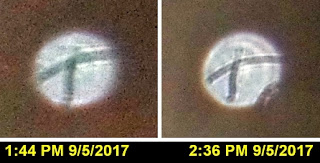 Imagine if someone were merely photographing natural particles. How often would a photographer get within the same hour by coincidence two particles that had distinctive markings this similar? The answer is: not once in a thousand reincarnated lifetimes.  There are quadrillions of possible ways in which random markings might be arranged inside an orb, so the chance of coincidentally getting a match this similar would be less than 1 in 1,000,000,000,000,000 during any hour.

In between taking these two photos, I took several other photos which showed nothing unusual -- no orbs, and no lines. No such lines were seen in any photos after the second photo, or before the first.  The photos had nothing to do with any camera irregularity.

These photos are the third and fourth times I have seen a T-shape in mysterious orbs I photographed. Two other examples are below. 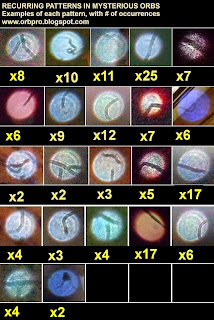