On the page here we have this headline: "UFO Activity Ongoing in Pennsylvania- Encounters with Small Spheres of Light Close to the Ground Increasing-August 13, 2022." We read the following:

"What I consider to be even more fascinating are the increase in reports of smaller generally spherical objects that are low to the ground and reportedly have been approaching within feet of witnesses in some cases. These encounters with mini-UFOs as I have called them for many years, are taking place in daylight as well as during the night."

The author reports that the objects range in size from a few inches to about a foot or two in diameter. He says, "In some cases, the objects appear to be solid metal, however most witnesses describe these objects as luminous globes of various colors."

Posted by Mark Mahin at 7:17 AM No comments:

We see below a mysterious orb I photographed indoors. We see features that rather bring to mind the idea of a winking face.

Posted by Mark Mahin at 7:44 AM No comments:

A Face-Like Triangle In Its Lower Right?

We see below a mysterious orb I photographed indoors. Note the odd feature in the lower right. It rather resembles some face.

Posted by Mark Mahin at 7:24 AM No comments:

Below we see a mysterious orb I photographed indoors. One edge is purple and the other edge is orange. 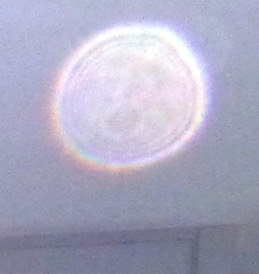 Posted by Mark Mahin at 7:26 AM No comments:

I continue with great frequency to have dreams that seem to symbolize life after death. By now I have had more than two hundred such dreams, which are all described in this post. An example is the dream I had this morning. I had a dream I was at my home, looking at an open trash can that had at its top a discarded envelope. The envelope was for a letter that I had sent to England, and which had been returned to me unopened. Only the envelope was in the trash, not the letter. The discarded envelope seems to symbolize the idea that when we die we discard a body that is a mere envelope for the soul. The round trip of the letter (going on a long journey and returning back to its home and source of origin) may symbolize the idea that after death a soul returns to its heavenly source, possibly (according to the idea of the soul's non-earthly pre-existence) a place where it lived before (its real home).

This morning I was in my bathroom, standing and thinking about all the dreams I have had that seemed to symbolize life after death. As I had such a thought, the bottle of mouthwash shown below mysteriously slid off the top of my toilet, falling to the ground.  The bottle was not near the edge of the toilet, but in the position shown below. It was just as if some mysterious power had sent some sign while I was thinking about life after death, as a way of accentuating such an idea. 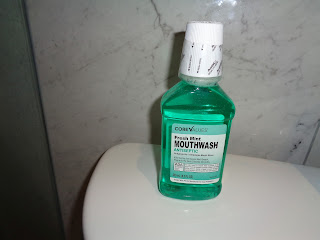 Postscript: The same event described above happened again on August 6, 2022 (4 days later), under identical physical circumstances (I was again standing in the bathroom when the event occurred). The bottle was in the same position shown above, and fell to the left, falling to the ground.

Posted by Mark Mahin at 8:04 AM No comments:

We see below a mysterious orb I photographed indoors. 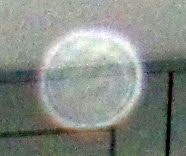 Posted by Mark Mahin at 8:45 AM No comments:

The photo below shows a mysterious pink orb I photographed indoors. 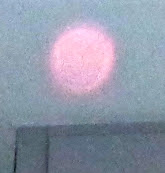 Posted by Mark Mahin at 9:12 AM No comments: