"Haunted" Camera Takes 300 Photos by Itself

The video below shows a most astonishing and inexplicable occurrence. While I was photographing falling water drops, I suddenly observed my Sony A6000 camera taking a very large number of photos, when no one was touching the camera.  The camera took about 300 photos by itself, without anyone touching it.  These photos occurred in 13 separate bursts, with about 8 or 9 seconds between most of these bursts.  The camera was in "Sports Action" mode, a "burst" mode that allows multiple pictures to be taken by holding down the shutter button.  Because there were 13 separate photo bursts, it was as if some invisible spirit was holding down the shutter button 13 separate times.


You can use this link to watch the video in a separate tab.

There are no possible camera settings that can cause this camera to perform in such a way.  There was no way that this could have been some "delayed action" effect produced by some self-timer setting. When the Sony A6000 is in "Sports Action" mode (also called "burst" mode), it is physically impossible to choose any of the "delayed action" or "self-timer" options offered by the camera (which cannot take more than 3 photos at a time when such options are chosen).

What we see in this video is a very dramatic manifestation similar to the equally inexplicable manifestation shown in this video, where we see the camera repeatedly changing its setting screens when no was touching it. I have also seen the same camera repeatedly take single-shot photos by itself, when I was three meters away from it (and no "delayed action" or "self-timer" setting was in effect).

I will not be enormously surprised if I one day see this Sony A6000 camera levitating, as such a thing would be no more wondrous and inexplicable than what is shown in these videos, and in the series of 130+ photo posts here, most of which  show photos taken with this camera.  Very many of the photos in that series seem to show a mysterious and incredibly precise control over matter that I find far more impressive than it would be if a camera were to simply rise up in the air.

Postscript:  There was nothing wrong with the shutter button or anything else on the camera in question, which worked without any problem during hour-long photography sessions on more than fifty different days between the date of this video (October 18, 2019) and December 31, 2019. 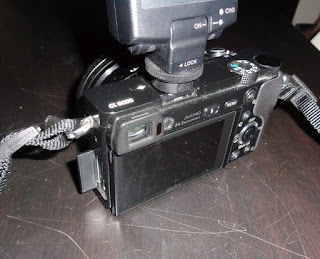