Below is a summary of 18 types of strange phenomena shown on this blog.

Shocking as it may seem, none of these effects are the result of any human artifice or trickery, since all of the photos on this blog are unaltered photos having no changes other than cropping (size-reduction) and minor color adjustments. The only things I ever do to my photos on this blog is to crop them to reduce their size, or sometimes use the Irfanview “Auto-adjust colors” menu option, or (very rarely) reduce the “gamma correction” (which is just a minor color adjustment). None of the photos on this site have been Photoshopped, and I have never used any version of Photoshop. 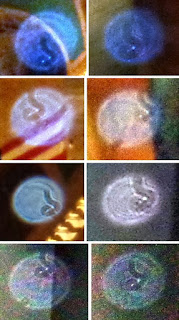 A recurring pattern seen in striped orbs. See this post for details.

The source of these incredibly strange anomalies is a mystery to me, and I do not possess any special psychic talent that I know of that might be involved. Some of these phenomena have been produced by other photographers (such as ecto-mist, orb swarms, moving orbs and orbs that appear to have faces), as you can see by looking at the sites in this list. But some of the items on the list above may have been documented only on this blog. 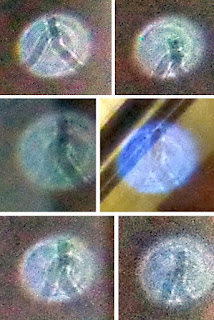 Another recurring pattern seen in striped orbs. See this post for details.
Posted by Mark Mahin at 8:11 PM

Email ThisBlogThis!Share to TwitterShare to FacebookShare to Pinterest
Labels: summary of phenomena on this blog