The grid below shows four mysterious orbs I photographed indoors in the past few days, all of which have stripes. 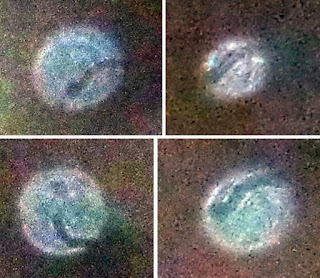 I have photographed over 500 mysterious striped orbs, as you can see here. Although many got mysterious orbs in their photos long before 2015, to the best of my knowledge, no one ever reported getting a striped orb in a photograph until the first time that I reported that in July 2015 (in this post).  I photographed many, many hundreds of mysterious orbs between September 2014 and June 2015, but did not get any striped orbs during that period (at least none that I noticed). Since July 2015, I have got these striped orbs in astounding numbers. The stripes only appear inside the orbs, never outside of them.
Posted by Mark Mahin at 8:38 AM