A Ghostly Event on Halloween?

This morning while I was working on my couch, about 17 feet away from my bathroom,  I heard my toilet flush. It was not just some little gurgle that might be caused by a blockage clearing up -- it was a very clear flush.

This event would have been completely unremarkable were it not for the fact that there was no one else in my apartment other than myself. I have no explanation for how this toilet flush could have occurred. The flush handle is the type that requires a strong flick of the wrist, a type that would not flush even if a mouse climbed on top of it. The toilet was a type (shown here) that has no tank and no flapper, so it couldn't have had the type of "flapper" problem that can cause a toilet to flush by itself.

It reminds me of an event that previously happened, on January 6, 2016. I was working on the sofa when suddenly a light turned on, a light on a table about a meter from me. The light was directly plugged into the wall, and is the type of light that can only turn on if you press a switch that makes a very distinct click sound. After turning the light off, and then trying to turn it back on, I then found the bulb had burnt out. It's easy to explain a light turning off when a bulb burns out, but how do you explain a light turning on when the bulb burns out? I have used both parts of the electrical outlet in question without any problem during the entire 9 months since this occurred, so "faulty wiring" will not work as an explanation.

I never find such incidents to be scary; I find them to be delightful. According to one type of "haunting" theory, you will never see anything strange going on in your home until you have some ghost who hangs around for a while in a haunting. But according to a different theory, you may very rarely get inexplicable signs of physical action from some unknown spiritual reality, which may occasionally give us a sign of its presence.  The latter type of event would not be something to be feared.

Postscript:  There was more Halloween spookiness later in the day. In the evening, at the very moment when I was re-reading the post above,  my toilet started flushing again when there was no one in the bathroom. This time it flushed full blast for a full 60 seconds.  I searched the Internet for cases of "ghost flushing" or "toilet flushed by itself," and found only cases of such a thing happening with types of toilets other than the type I have (shown here), a toilet without any tank or flapper or float device. There has been no such incident so far today.

Post-postscript: It is now Sept 6, 2017, and in the roughly 10 months since this event there have been no other cases of the toilet flushing by itself.   The only two cases happened on Halloween. Eerie!
Posted by Mark Mahin at 8:57 AM

30+ Ovals Inside Each Circle 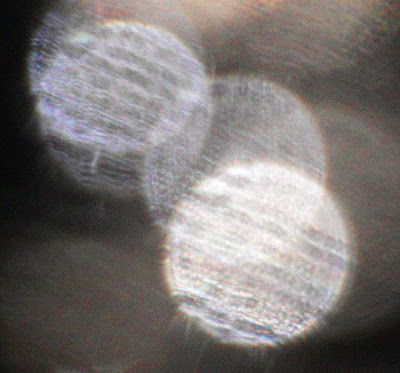