The photos below show four orbs that I photographed (on August 19, September 20, September 21, and October 10 of 2016). All four orbs have an outer ring, a feature I have seen in 87 other orbs I photographed, as shown here.  The orbs in the first row seem to have an identical dimple-like feature in their center. 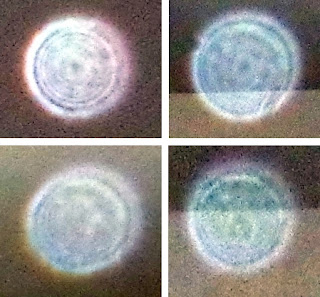 These type of outer rings in orbs have been photographed by many other people. Here is an example from a Dutch orb site.  In this one we see a more dramatic case.
Posted by Mark Mahin at 10:41 AM