Mysterious Motif: Another Orb With a Curved Shadow Stripe

The top left photo shows a mysterious orb I photographed on October 20, 2016.  The other five photos shows orbs I previously photographed (they are part of this series of posts). Notice the recurrence of the arch-like curve motif. In five of these photos we see not just a stripe, but a very distinctive type of stripe that clothes makers call a shadow stripe (in which a larger stripe is flanked by a thin stripe). 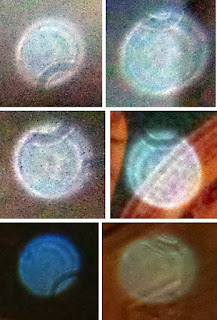 See here for other types of recurring motifs I am seeing in mysterious orbs, such as an "inverted Y" motif I have photographed 5 times.
Posted by Mark Mahin at 8:52 AM